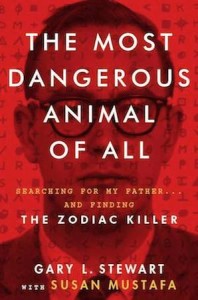 Very few books can be properly described as unique, and in particular there are very few new things under the True Crime sun. But I promise that you’ve never read anything like The Most Dangerous Animal of All by Gary L. Stewart with Susan Mustafa. The tale they tell is mesmerizing from the first page, and the story includes a shattering surprise that will sear itself in your memory. Just be prepared to read non-stop; as opposed to the usual overblown hype, this really is a book that you won’t be able to put down. – Jeff Guinn, author of Manson: The Life and Times of Charles Manson.

The central paradox about true crime books is that although serial killers are among the least interesting human beings, our fascination with the excitement of tracking down these obsessive monsters has actually spawned thousands of books, movies, and television shows, real or imagined, about them. Several habitual murderers have returned the favor by taunting us with codes and clues about themselves, none more defiantly than California’s so-called Zodiac Killer. In this extraordinarily intimate memoir, author Gary Stewart went searching for his father and became convinced that the man he found had been the dreaded Zodiac. Thus, his hunt for clues is more personal than any detective’s, making it stranger and more knotty than a narrative fixated on the now deceased accused culprit. The Most Dangerous Animal of All is not your conventional true crime book; for me, that makes it more winning. – R.J. Wilson, Bookseller, #1002, New York NY

An adopted Louisiana engineer’s search for his biological roots results in a shocking, highly controversial connection to the Zodiac Killer.

With its details legally vetted and enshrouded in pre-publication secrecy, Stewart’s head-turning memoir, skillfully co-written by veteran true-crime journalist Mustafa, explores how the search for personal truth can sometimes unearth unexpected results. Though his adoptive parents loved him unconditionally, the author still felt “discarded,” plagued by crippling feelings of insecurity and abandonment. At 39, Stewart writes of being contacted by his birth mother, Judy Gilford, a runaway who became pregnant by an older, seductive man. The author, ecstatic at their reunion, began journaling his experience, which soon included an intensive, obsessive search for his father, who he believes to be Earl Van Best Jr., a statutory rapist Stewart would soon discover had abandoned him in a Baton Rouge apartment building stairwell—and who he believes went on to become a notorious murderer. The narrative begins to build suspenseful momentum only after early sections that re-create Best’s fractured childhood and early adulthood (heavily influenced, claims Stewart, by notorious Satanist Anton LaVey). Then the author chronicles the ensuing killing spree, encrypted communications and police-taunting media spectacle that immortalized him as the Zodiac Killer. The author painstakingly pieces together over a decade’s worth of personal research and verbatim interviews with family, friends and law enforcement, then goes further to scrutinize and compare handwriting samples, police sketches and photographs, all bearing uncanny resemblances to recorded documentation from the Zodiac files. Stewart soberingly remarks that while the burden of DNA proof remains elusive, the closure he has received with his personal investigation has satisfactorily provided the “truth about my life.”

High-minded speculation and documented assumptions are the building blocks of Stewart’s convincing memoir; whether perceived as the byproduct of shrewd spadework or a fertile imagination, the author’s family history offers chilling and credible correlations.

Gary Stewart made many amazing discoveries while researching the life of his father, Earl Van Best Jr. One of the most fortuitous was engaging award-winning true-crime author Susan Mustafa as his co-author for The Most Dangerous Animal of All.  Stewart’s diaries and tenacious search, coupled with Mustafa’s expertise, make a convincing case that Stewart’s father was the infamous Zodiac killer. Mustafa and Stewart tell the story with tension, empathy, and grace. The moments of tenderness are just as grabbing as the moments of terror—a balance that is hard to attain in such a dark, complex, wholly human story.—Michael McCall, journalist, author, reviewer