Published in the Riverside Reader

The prosecutor slammed the shovel hard, cracking it against the floor causing the jurors to jump.  The sound reverberated through the courtroom.  “THAT is how Robbie Daniel crashed in the skull of that young girl,” he said.

Defense attorney Jerry D’Aquila jumped to his feet.  “Objection,” he yelled.  “Mr. Clayton is inflaming the jury.  Judge, we don’t need this kind of theatrics in the courtroom.”

Tony Clayton continued his closing argument, explaining to jurors how paint from that shovel had been imbedded into the skull of 17-year-old Michelle Sparks, a young girl from Erwinville who had met Daniel at the fruit stand where she worked.  Although he was involved in a homosexual relationship with an older man, Daniel had fallen in love with Sparks, and on the day of her death the two had smoked a joint together then gone to Daniel’s house.  As Sparks leaned down to play with some puppies, Daniel viciously hit her in the head with the shovel, then placed her body in a drainage ditch behind his home.  But there was no real motive.

Prosecutor Tony Clayton didn’t need one.  He had the shovel.  He had phone calls placed from Daniel’s cell phone in the vicinity, although Daniel told police he was in Watson.  He had the paint from the shovel found in Daniel’s yard.  He had the girl’s body discovered two weeks later behind his home.  Daniel had covered her with some carpet and towels.  Investigators found matching towels in Daniel’s backyard.  But there was no DNA, no blood on the shovel.  The case was not a shoo-in.  Clayton’s cases rarely are, but that doesn’t stop him from prosecuting.  He likes the hard cases.  It makes the justice that much sweeter.

Clayton’s life as Assistant District Attorney for West Baton Rouge Parish is filled with the most gruesome aspects of life.  He experiences firsthand the human depravity that most of us only view dispassionately from the comfort of our couches as we watch our televisions.

“Cases like this remind me of why I do this job,” Clayton explained.  “When I was called to the Sparks murder, I watched as the police examined the area while Sparks’ battered body lay in that ditch.  I watched Sheriff Mike Cazes take off his shirt, then wade in and pull that little girl’s body out.  He didn’t have to do that, but he couldn’t stand to see her like that.  To me, he is a hero, and it is in those moments that these cases become personal.”

After winning a guilty verdict against Daniel, Clayton added another victory to his unblemished prosecutorial record.  Despite his flamboyance, despite the theatrics, Clayton knows the law and knows how to use it to win justice for the families of victims.  But the day-to-day living with the horror is never easy for the prosecutor.

“One of the cases that got to me the most was Edward Tyrone Washington, who killed his ex-wife, her boyfriend, his ex sister-in-law, and his four-year-old nephew.  Washington’s three-year-old son was the only eyewitness.  A day and a half later, police found the three-year-old drenched in blood and holding the body of his little cousin.  The boy told police, ‘My daddy made my mommy fall.’ That statement was allowed in at the trial.  It was gut wrenching.  Washington will spend the rest of his life waiting to die in Angola.”

Because of the demographics of the area, many of Clayton’s cases involve African American murderers, and the prosecutor finds himself in the position of handling most of those cases.  Having a black prosecutor trying black men erases the racial element for the jury, which is one reason many of these cases fall into Clayton’s able hands.  But he doesn’t see it like that.  “Babies don’t cry black tears or white tears.  They cry tears from pain.  Crime causes pain, and my job is to stop the pain—to bring justice to the victims’ families.  Unfortunately, we live in a world of crime.  We, as black people, have come a long way.  We are a good race of people, but like all other races a small percentage of us participate in violent crimes.  I’m simply weeding out the bad element.  It’s a matter of good versus evil.  I’m going for good.”

But justice wasn’t always Clayton’s calling.  As a young man growing up just outside of Brusly, Clayton simply wanted to attend college, to make something of himself—an attitude instilled into him by his parents Ernest and Clara.  After meeting his now-wife, Paula, Clayton’s attention turned to law school as he “wanted to impress the girl.”  He attended Southern University and graduated Cum Laude in 1991 with a juris doctorate at his disposal.  Soon after, he and Paula went into business together, opening their own law firm in Port Allen.  Clayton handled personal injury, while Paula focused on family law.  Their relationship blossomed, and the two married.

“Being married and in business together worked for us, mostly because we stayed out of each other’s business.  We don’t talk about our cases at home.  Paula hates personal injury, and I didn’t like family law,” Clayton laughs.  “It was the perfect combination.  We’ve been business partners for 15 years.”

Clayton’s reputation as a personal injury attorney grew.  He sometimes works with other attorneys to earn huge compensations for clients, including a $21 million verdict for a client in Plaquemine, $11.4 million in a case out of New Orleans, and $8 million for a case in West Baton Rouge Parish.   And Clayton’s reputation as a trial lawyer became even bigger.  As the victories kept coming, he became known as the prosecutor who could get the job done, no matter how challenging the case.  “If I’m successful as a personal injury lawyer, it’s because of Ricky Ward and Doug Moreau.  Because of their faith in me, I’m constantly in a courtroom and on top of my game.  That helps me when working personal injury cases.”

Because he throws himself wholeheartedly into anything he does, Clayton’s life is a busy one.  Days sometimes run into each other as he moves between cases, his family, and civic activities that need his attention.  One of those activities includes his role as a member of Southern University’s board of directors.  “That is a unique experience for me,” he says.  “Southern has been the aircraft carrier that launched my career.  It’s almost like a sacred maternal thing.  I want to always take care of its mission.  This university takes the rocks out of the backyard cane fields and polishes them into gems that will go out into our community and make a difference.  Education is all about making a difference, and I’m very proud to be a part of that.”

Some of that civic-mindedness could soon be turned into a bid for the Senate as Clayton is considering running for Cleo Field’s seat in 2008.  “This seems to be a logical next-step for me,” he says.  “I enjoy being a prosecutor, mostly because I represent the people.  The aftermath of Katrina and Rita has really brought home to everyone the need for a state government that truly represents the interests of the people.  I’ve talked with so many residents, including members of my own family, who have been affected by these storms and are having difficulty rebuilding their lives.  My goal is to bring in new ideas that will help with the rebuilding so that our citizens can have a better quality of life here in Louisiana.” 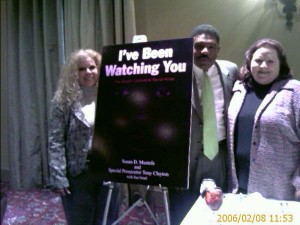 Although ambition is a strong driving force in this prosecutor’s life, his successes always revolve around some form of justice.  Even the recent release of the book he co-wrote with Susan D. Mustafa and Sue Israel—I’ve Been Watching You: The South Louisiana Serial Killer [later published as Blood Bath]—was about justice, about letting the world know the monster that was Derrick Todd Lee.  That case affected Clayton more than most.

“Geralyn DeSoto lived just up the street from where I was raised in Addis.  That brought her murder home to me.  She was so young, and had so much to look forward to in her life.  As Sheriff Mike Cazes, my boss Ricky Ward, and I investigated her case, it became more and more personal.  Afterwards, so many people were asking me why Derrick Todd Lee did this, how he got into the homes of his victims, why he wasn’t caught sooner.  I wanted to provide those answers.  I wanted people to experience the horror that he inflicted so that they would know how to better protect themselves.  I wanted people to feel the loss of the victims.  That’s what the book is about.  It’s about surviving in a world filled with human depravity.  It’s about living in the world I have to deal with everyday.  It’s not a pretty world sometimes, and this book brings that home.”

Clayton earned a life sentence for Lee, but many of Clayton’s cases are death penalty cases, and that is not easy for the prosecutor.  “It’s almost like playing God.  My job is to convince a jury to sentence someone to life in Angola or to death by lethal injection.  That’s not an easy thing to do, and each death penalty case must be given the utmost consideration.  How do you decide if someone has the right to live?  I struggle with that.  While researching the book, we went to Death Row Angola, and I was very uncomfortable because the prison holds so many men that I have prosecuted for murder.  But when you think about the young men and women who have been murdered in the most gruesome ways, their lives cut short because of the acts of another, you know that justice must prevail.  The death penalty is a punishment under the law, and when a murderer commits acts that are sometimes beyond comprehension, I must pursue that sentence.  It’s the most difficult part of my job.”

So how does this prosecutor cope with his world that is so filled with horrific murders?  “My family keeps me sane,” Clayton explains.  “I can go home from a murder scene and look at T.J., my youngest boy, and my heart just melts.  Knowing that I have to provide for my family keeps me going.  And knowing that I help to bring justice to those affected by crime keeps me strong and motivated.  This is my calling.”