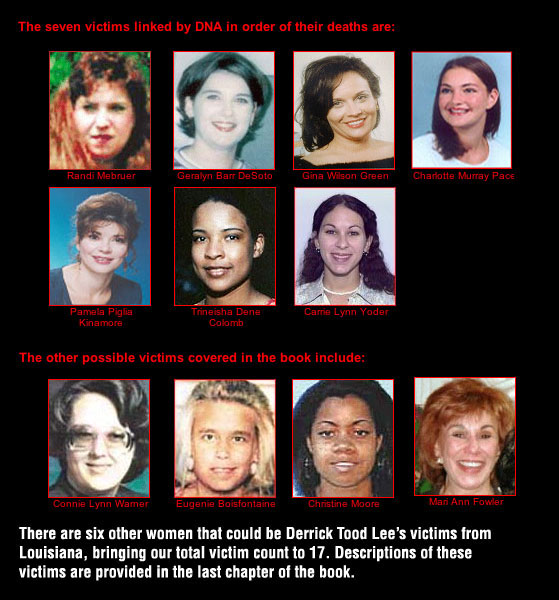 Randi Mebruer: Randi Mebruer disappeared from her home in Oak Shadows subdivision in Zachary, Louisiana, on April 18, 1998, while her three-year-old son slept in his bedroom.  Her house, just one block from the home of Connie Warner, was covered in blood.  Derrick Todd Lee was one of the main suspects in Randi’s disappearance.  Randi’s body has never been found.  Randi worked in home health care, and she was a pretty white woman with reddish-brown hair, a beautiful smile, and pronounced cheekbones.  She was 28 years old.

Gina Wilson Green: Gina Wilson Green was raped and murdered in her home on Stanford Avenue in Baton Rouge on September 23, 2001.  Her body was discovered on September 24 by a co-worker who decided to check on her when she did not report for work.  The cause of her death was determined to be strangulation.  Gina was a nurse of infusion, a beautiful white woman with dark brown hair, a beautiful smile, and high, pronounced cheekbones.  She was 39 years old.

Geralyn Barr DeSoto: Geralyn Barr DeSoto was stabbed to death and almost beheaded in her home off of Highway 1 in Addis, Louisiana, just across the Mississippi River from Baton Rouge, on January 14, 2002.  She was discovered by her husband, Darren, when he returned home from work that day.  Derrick Todd Lee was convicted of her murder in August of 2004.  He received a life sentence.  Geralyn was a white LSU student with dark brown, a lovely smile, and high, pronounced cheekbones.  She was only 21 years old.

Charlotte Murray Pace: Charlotte Murray Pace was raped and stabbed to death in her home on Sharlo Avenue in Baton Rouge on May 31, 2002.  She had recently moved from Stanford Avenue where Gina Wilson Green had been murdered.  She was stabbed 83 times with a flathead screwdriver.  Murray, as her friends and family called her, had graduated from LSU just days before, the youngest person ever to receive an MBA in business administration from the university.  Derrick Todd Lee was convicted of her murder in October 2004.  He received the death penalty.  Murray was a white woman with dark brown hair, a big, friendly smile and pronounced cheekbones.  She was 22 years old.

Pamela Piglia Kinamore: Pamela Piglia Kinamore disappeared from her home in Briarwood Estates in Baton Rouge on July 12, 2002.  Her body was discovered four days later under the Whiskey Bay Bridge, which stretches over the Atchafalaya Swamp just west of Baton Rouge.  She had been raped and her throat slit several times to the point that she was almost beheaded.  Pam was the owner of an antique shop—Comforts and Joys—in Denham Springs, Louisiana.   Pam was a white woman with dark brown hair, a beaming smile, and high, pronounced cheekbones.  She was 44 years old.

Trineisha Dené Colomb: Trineisha Dené Colomb disappeared from beside her mother’s grave in Grand Coteau, Louisiana, on November 21, 2002.  She was discovered November 24 in a wooded area off of Renaud Drive in Scott, Louisiana, by a hunter.  She had been raped and beaten to death.  At the time of her death, Dené was trying to cope with the loss of her mother just seven months earlier and was planning to join the Marine Corps.  Dené was a black woman with dark brown hair, light skin, a beautiful smile, and pronounced cheekbones.  She was 23 years old.

Carrie Lynn Yoder: Carrie Lynn Yoder had just returned from a trip to New Orleans for Mardi Gras when she disappeared from her home on Dodson Avenue in Baton Rouge on March 3, 2003.  Her body was found floating under the Whiskey Bay Bridge on March 13.  She had been raped, beaten, and strangled.  Carrie, originally from Tampa, was working on her master’s degree at LSU.   Her dream was to save Louisiana’s wetlands.  Carrie was a white woman with long, curly, brown hair, a big smile, and pronounced cheekbones.  She was 26 years old.

Other Women Believed to Be Derrick Todd Lee’s Victims

Connie Lynn Warner: Connie Lynn Warner disappeared from her home in Oak Shadows subdivision in Zachary, Louisiana, on either August 23 or August 24 in 1992.  Her body was discovered on Sorrel Street on September 2, 1992 near the Capitol Lake close to the state capitol building.  All clues to her attacker were washed away by Hurricane Andrew, which had swept through Baton Rouge on August 26.  It was determined that she died from a skull fracture, which resulted from a beating.  Connie, an accountant, was an attractive white woman with dark brown hair, pronounced cheekbones, and a wide, friendly smile.  She was 41 years old.

Eugenie Boisfontaine: Eugenie Boisfontaine disappeared June 13, 1997 from either her home on Stanford Avenue in Baton Rouge or from the LSU lakes where she sometimes liked to take walks.  A visiting professor found her credit cards aligned in a circle near the lakes on June 14.  Her body was discovered August 7 in Bayou Manchac near the Alligator Bayou Bar.

She had died from a skull fracture resulting from a beating.  Although she had never been officially linked, many investigators feel that the location of her home indicates that she was Derrick Todd Lee’s first victim from Stanford Avenue.  Eugenie was a white woman with brown, highlighted hair, a beautiful smile and high, pronounced cheekbones.  She was 34 years old.

Christine Moore: Christine Moore disappeared while jogging along River Road in Baton Rouge on May 23, 2002, not far from the home of Charlotte Murray Pace who was murdered a week later.  Her body would be discovered on June 16 in a ravine that ran alongside the Ebenezer Baptist Church just a few miles further down River Road.  Dogs were scavenging her remains.  She died from a skull fracture resulting from blunt force trauma.  Christine was working on her master’s degree at LSU.  She was a black woman with dark brown hair, beautiful eyes, a beautiful smile and pronounced cheekbones.  She was 23 years old.

Mari Ann Fowler: Mari Ann Fowler disappeared from the parking lot of a Subway restaurant in Port Allen, Louisiana, on Christmas Eve in 2002.  Her body has never been found.  Mari Ann was the wife of a jailed former commissioner of elections.  She bore a striking resemblance to Lynne Marino, the mother of Pam Kinamore.  Mari Ann was on her way to visit her husband in prison when she disappeared.  Derrick Todd Lee’s cell phone hit off of a cell tower just fourteen miles from where she was taken about 20 minutes before her disappearance.  Mari Ann was a white woman with reddish-brown hair, a wide, friendly smile, and pronounced cheekbones.  She was 65 years old.

There are six other women that could be Derrick Todd Lee’s victims from Louisiana, bringing our total victim count to 17.  Descriptions of these victims are provided in the last chapter of the book.