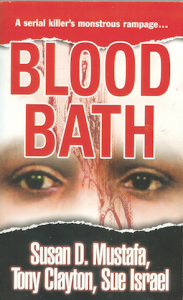 “So expertly written and reported…It scared the bejesus out of me!” – Alanna Nash, author of The Colonel: The Extraordinary Story of Colonel Tom Parker and Elvis Presley

“I’ve Been Watching You [Blood Bath] is just as ominous as the title sounds. It takes us into the mentally bizarre world of a real serial killer as he stalks and defiles beautiful and talented women whom he hates for being “too good” for him. While clearly sympathetic with the victims, the authors are never preachy or academic in their account of the long and frustrating hunt that finally brought him to justice. With its combination of first-rate reporting on actual police procedures and its novelistic eye for detail, this story is a healthy antidote to the unrealistically infallible CSI school of crime solving.” – Edward Morris, reviewer for BookPage and ForeWord magazines

“Mustafa invited horror into her home, looked it in the eye and squashed it with a creative energy used to produce a book that touches the soul.” – Dave Moormann, Southeast News

In her book, I’ve been Watching You, [Blood Bath] Susan Mustafa enlists the help of Tony Clayton and Sue Israel to portray Derrick Todd Lee as a teeth-gnashing, heartless and depraved frame of a man who showed no remorse for his actions and selfishly gave no explanation to the victims’ family members he left in his wake.

He stalked them, he waited for them to be home alone, he tricked them using their own tender hearts.  Then, he horrified them, beat them, raped them and ultimately sucked their lives from them.  And as if this wasn’t insult enough to their existence, he disrespected their bodies by leaving them lying naked in their own blood, or face down in the muddy waters of South Louisiana to be picked apart by the wild.

It was obvious that Mustafa walked the steps of the killer and the victims.  With descriptions that could map the area, Mustafa draws pictures with her words of the terror, the crime scenes and the aftermath of each murder while keeping the victims in mind.  The book holds readers by capturing their hearts, truly allowing them to know the victims and their family members.  Mustafa showed that these women were wives, mothers, daughters, friends, aunts and pillars of the community in which they lived and died.

Mustafa is a native of Slidell, Louisiana, and graduate of Southeastern Louisiana University. Her journalism background shines in this true crime book, as she answers the questions for readers before they must ask.  She tells the story as if she hovered overhead while it was happening, helpless as we all were to stop it.

Two other authors contributed their expertise to the book so much that they share the front cover with Mustafa.  Tony Clayton, who supplied the insight and tactics used to convict Lee of murdering Geralyn DeSoto, was the special prosecutor in the case.  And Sue Israel brought 20 years of writing and editing experience to the book.  Together, this “dream team” created a piece of history, detailing the horror that trapped Louisiana women for months, and unbeknownst to them, years on end.  This chilling sequence of events will have women locking their doors and looking around corners for days upon its completion.  In the words of victim Pam Kinnamore’s mother Lynne Marino at a book signing in Baton Rouge, “This is a story that needed to be told.”  These authors have done so in its entirety. – Dr. Amber Reetz Narro, Southeastern Louisiana University

The story of Derrick Todd Lee, the south Louisiana serial killer, is scary and unnerving.

“I’ve been watching you,” is a scary thing to hear. That’s the premise that authors Susan Mustafa and Tony Clayton present in their true-crime book so titled. Their story is about Louisiana’s most prolific serial killer, Derrick Todd Lee, whose crime spree escalated from peeping at and stalking women to murderous rage in the Baton Rouge area and parts of south Louisiana.

The book tells a complete and compelling story of murder by offering the backgrounds of victims as well as their killer in equal measures of drama. The authors, with writer Sue Israel, have taken a long, hard look at Todd Lee, a seemingly likable black kid who grew up to fancy designer jeans and gold chains and to nourish an uncontrollable lust for women. It was a succession of women, mostly white, who were spied on with deliberate intent and subsequently killed horrendously by Todd Lee.

It was women like Gina Wilson Green—39 years old, “still pretty with silky brown hair and a stunning smile” and living in a pretty bungalow in Baton Rouge—who caught his dark attention. Todd Lee “stood very still” and waited outside her window.

There was Trineisha Dené Colomb, who had not been very concerned about the serial killer because the man they talked about on the news “only went after white women.” Colomb was black. Her body was found face down in a pool of blood with nine head wounds.

The writers don’t try to soften the graphic particulars of the murderous path taken by the killer, who was considered mildly retarded yet managed to elude capture and identity for years—a curious fact that remains something of a puzzle. For example, a young female victim whom he had attacked identified him in a lineup, yet nothing was done. In addition, many law enforcement officers cast a suspicious eye his way but were unable to nail him.

Another tragic paradox about this case was the number of times Derrick Todd Lee was in the clutches of the justice system but was nonetheless allowed “to wander about south Louisiana searching for pretty women.” Short stretches in jail and suspended sentences were a part of his criminal history.

A particularly poignant chapter tells the story of Pam Kinamore, a woman who brought a happy, upbeat swing to her life and who felt herself lucky—until she heard “the sound of someone coming into the bedroom.” She had left her keys in the door. “This is going to be easy” was the killer’s thought, as told by the writers.

The writers make many assumptions about situations, thoughts, moods and dialogue, but those assumptions are acceptable given the “you are there” style of the book. A typical example is the attribution of the thought, “This is going to be easy,” to the killer. Did he say that, or think it—or has it been presumed that he did? Even today, Todd Lee remains tight-lipped about the crimes for which he has been convicted. Thus, a host of intimacies from the victims may or may not be literary speculation, but they bring a heart-rending touch to the telling of this chilling tale.

Ultimately, Derrick Todd Lee was nailed by DNA evidence that co-author Tony Clayton, a special prosecutor in West Baton Rouge Parish, presented to jurors after he got the call for the first case to be tried.  He had a special interest in the murder of Geralyn Barr DeSoto.  Clayton “had ridden his bicycle down the same road that Todd Lee went looking for victims.”

Ever-present in this tale is the terrible thought that so many women might have been spared had Derrick Todd Lee been identified and caught when he first showed signs of his aberrant behavior. He wasn’t, and consequently he cut a huge, murderous swath—unchecked for years—across south Louisiana. Too much time elapsed because of mistaken identities and theories, such as one that pegged the killer as a white male. The authors make no indictment against police detectives, but the facts speak for themselves.

I’ve Been Watching You [Blood Bath] is a good read.  It is also scary—even unnerving at times—but true crime stories almost have to be that way to be told effectively. – Lily Jackson, Gambit Weekly, BestofNewOrleans.com.

“If you were at all affected by the terror Derrick Todd Lee brought to our beautiful city and lives, this book is a must read. The authors do not waste your time and do not waste words. I’ve Been Watching You [Blood Bath] does not just tell you the story, but takes you on the journey.

Derrick Todd Lee will go down in history as one of the most difficult serial killers to catch, much less profile. This book lays all of that on the table for you. There were certain parts I read without breathing.” – Jodi Carson, Clear Channel Radio, 96.1 The River