It’s amazing how a single telephone call can change your life. It happened in March 2012 when I called Earl Heard, local book publisher and founder and publisher of BIC newsmagazine. Gary L. Stewart happened to be in Earl’s office discussing a book he wanted to write about his search for his biological father. During the course of their conversation, Gary expressed that he was looking for a writer to help him write the book. I called at that exact moment, and Earl handed Gary the phone. 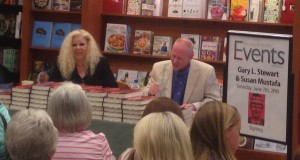 Susan and Gary at the June 7, 2014 book signing at Barnes & Noble in Baton Rouge.

When Gary began relating the details of his story to me, I have to admit I was skeptical. He gave me some background and then said he had evidence that his father was the Zodiac killer. I spend my life researching serial killers and was familiar with the Zodiac and the numerous people who had claimed that the Zodiac was this person or that. Like I said, I was skeptical. However, Gary seemed sincere in his belief, and I agreed to read the massive amount of documentation he had accumulated in a partial manuscript he had written. By midnight, a few days later, I was sitting near a fire pit outside of a hotel in Biloxi engrossed in one of the most incredible stories I had ever read. It had everything—an illicit romance, fugitives from the law, an abandoned baby, an infamous serial killer, a police cover up, and an incredible amount of heartbreak along the way. But was it true?

I knew I had to be careful. I had co-authored two true crime books before—Blood Bath about serial killer Derrick Todd Lee, written with Special Prosecutor Tony Clayton and Sue Israel; and Dismembered about serial killer Sean Vincent Gillis, written with Sue Israel. My co-authors and I had earned a reputation for researching these cases thoroughly and relating them accurately.

As I sifted through the mounds of evidence Gary had collected throughout a decade, I became more and more convinced that he was onto something, but when I saw that Gary had discovered his father’s name—EV Best Jr—in the solved version of 408 Cipher published in newspapers throughout California, I got that feeling journalists get when they know they’ve stumbled onto a powerful clue. The Zodiac had stated in a letter to newspapers that if the cipher were solved, police would have his identity, hinting that his name was imbedded there. I knew at that moment Gary’s belief had substance, and I agreed to help him investigate further and co-author the book with him.

The research into this book was very different than what I had previously experienced because the Lee and Gillis books were researched in real time. I sat in on their trials, interviewed prosecutors, detectives, and family members of the victims, interviewed friends and family members of the killers, and I lived in Baton Rouge where many of the murders took place. Suddenly I was tasked with writing about a series of events that stretched from California to Louisiana and beyond, and the Zodiac murders had occurred more than four decades ago. For me, the research was fascinating—learning about the lives of Gary’s grandparents through old letters, government records, and family members; reading about the Ice Cream romance in newspapers across the country; learning about the Zodiac through police reports, the Zodiac’s own letters, and the plethora of information available on this killer; interviewing people who knew Earl Van Best Jr., including Gary’s mother, Judy Chandler; and visiting San Francisco where Gary and I followed the life of his father from place to place. Before long, we began calling each other Holmes and Watson because of the amount of time we spent every day putting the pieces of this puzzle together. Gary was Holmes, and I was Watson. It was an incredible time—every investigative journalist’s dream.

Understanding that we needed more forensic evidence, we contacted Michael N. Wakshull, a forensic document examiner in Riverside, California, and asked him to look at four documents that contained Van’s handwriting and compare them to the Zodiac’s handwriting. Wakshull, too, was skeptical and informed me in no uncertain terms that he would not risk his reputation for this. I persuaded him to just look at the documents. Two months later, he sent us a 65-page report, complete with exhibits and a letter stating that he was virtually certain that the handwriting on the documents we provided matched the handwriting on the Zodiac letters. The similarities in the handwriting were astounding, and we knew we had that final piece of evidence we needed to go forward with this project.

I can tell you that the writing of The Most Dangerous Animal of All: Searching For My Father and Finding the Zodiac Killer was the most challenging endeavor of my career simply because there was so much story to condense into a cohesive, plot-driven narrative that explained Gary’s father’s background in a way such that readers could see how and why he eventually became a serial killer, chronicled the Ice Cream Romance, examined the Zodiac murders about which whole books have been written, and showed the lengths to which Gary went to uncover the truth. All of this had to be weaved around the culture of San Francisco during a period in American history when the country was undergoing not only a Civil Rights Movement, but also a counter-culture revolution that would change everything from music to how women were treated in our society.

And then came the harder part—selling this particular story to a publisher who knows many previous books have been written on the same subject. That involves writing a proposal (many publishers will not read full manuscripts), and condensing the book down to 50 pages that includes an overview, an audience analysis, a market analysis, author bios, and one chapter of the book. Basically, you have to convince publishers that they should publish your book when they haven’t read it. Not an easy task, I can assure you.

After all the hard work that went into this book, one of the happiest moments we experienced came when we were sitting beside the Hudson River in New York City, looking at the Statue of Liberty (me for the first time), and our agent, B.G. Dilworth, called to say HarperCollins wanted to publish the book. That was an intense moment. We both had tears streaming down our faces, as did our spouses who had spent the previous year watching us work night and day to make this book as compelling as it could be.

We soon learned that our work had really just begun. Once a book is submitted, it must go through a legal read by the legal counsel for the publisher, who strenuously vet it to make sure it is legally sound. Then came the revisions. Our editors, Jennifer Barth and Michael Signorelli were top-notch, and the next few months were spent in a flurry of back and forth as they worked with us to ensure that we delivered an unblemished final product to the public. Gary and I are so grateful to both of them for how much we learned about writing during this process.

For Gary, this incredible journey began 12 years ago when he first met his birthmother. For me, it began two years ago when I had the privilege to meet Gary and then help him write this book. For both of us, the best moment yet came when The Most Dangerous Animal of All made its way onto The New York Times Best Sellers List in its first week, debuting at No. 23 in E-Book Non-Fiction and published in the June 1 edition of The New York Times Book Review. For a writer, it doesn’t get any better than that. I am so grateful to Gary for choosing me to help him tell his incredible story!